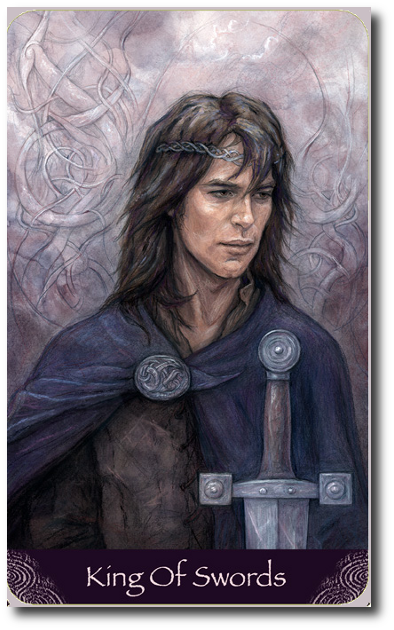 The King of Swords is the Prince of the Chariot of the Winds and represents mastery of mental skills, strategy and rhetoric. He is aligned with those Air signs of Gemini, Libra and Aquarius.

The King of Swords is the ultimate strategist. He is focused, direct and clever. He is driven by intellectual curiosity and pride and loves a battle of words. Some will say he is emotionally cold but it is only because he speaks directly to the truth and does not believe in garnishing the truth to spare the emotions.

The King of Swords is an idealist and so is often impractical and unable to deal with the murky reality of life in all its messiness.

He is a list-maker, an organiser, a person who can be relied on to plan, communicate and execute a way forward. He is a lawmaker and justice seeker, his mind is like  a steel trap and he is the person to approach when you need a clear cut plan of action.

When the King of Swords turns up in a reading, he signals the necessity to adopt clear thinking, fairness and logic in a situation that has been troubling you. It is time to put emotional arguments aside and stop putting things off in the hope that the situation will improve on its own. If you need to seek advice to gain clarity on a matter that has been troubling you, then now is the time to do so. Sometimes we just need an unbiased view and opinion from someone who resides outside of the problem.

The appearance of this card also calls for you to develop the qualities of fairmindedness, logical thinking and decisive action in order to make progress in your life now. You may have been wallowing in the shallows of indecisiveness or mired in the mud of inaction, but the time has now come to cut to the truth and by the most direct route to a clear purpose and ultimately, peace and happiness.

Image from "Tarot of the Hidden Realm" © Julia Jeffrey.