The Emperor is Son/Sun of the Morning, the
Chief among the Mighty and is ruled by Aries. He represents authority, order and responsibility. 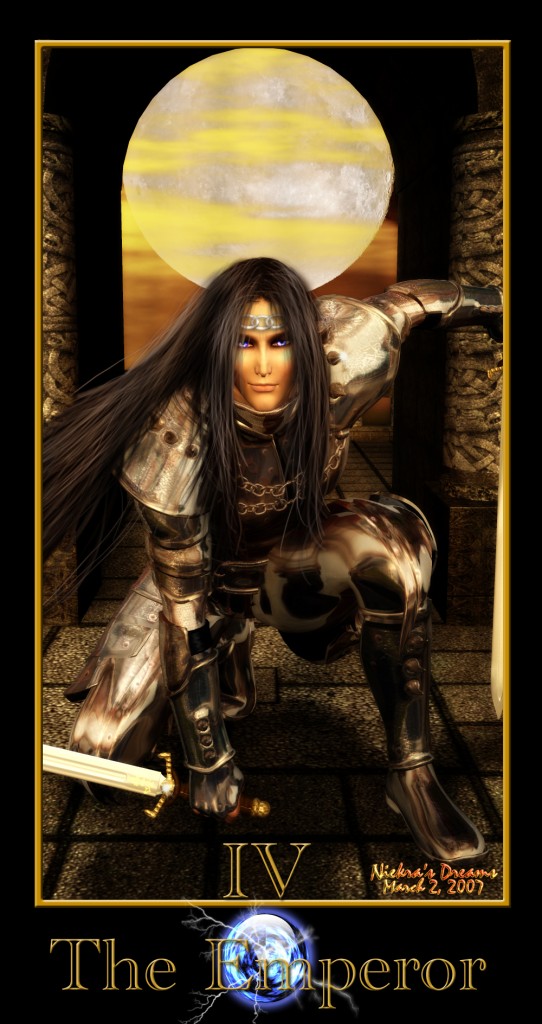 The card of The Emperor is the culmination of superior masculine qualities that are called for to face a situation that is coming up for you.

He asks and requires deliberate thought, decisive action and the ability to stick to your resolve and not be swayed by emotion or fear.

He brings more responsibility into your life, and a time where you need to own your life and your choices, not make excuses or blame others for your circumstances. He is steadfast, serious and a rock that can be relied upon in hard times.

The Emperor is also the Sovereign and as such commands respect for the burdens he takes on for the sake of peace and stability. If he must go to war, he does so with gritty determination and a strong will to succeed. This can be translated into many areas of life, whether career, relationships or finances – the card describes the attitude and actions you need to adopt now in order to succeed.

I like to view the Major Arcana (of which this card is the fifth in the series) as indications of our own path in life and the lessons that arise to bring us to the next stage of our mental, spiritual & emotional development. They are all archetypal experiences that we uncover either directly, or via others in our life, but we can also internalise the lessons of each and every one of them if we so choose.

This is straight forward when the card turns up in a reading for a man. When a masculine card such as this one shows up in a single card reading for a woman, then I will read it as a stage in this journey for her. This means that the qualities and gifts of the Emperor will be important to her either on an internal level, or if she is not ready to own the direct experience of The Emperor, then she will experience it ‘out there’ in a masculine figure of power, whether it be a father, boss, authority figure or even a lover.