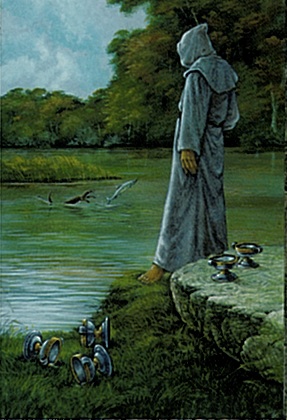 The Five of Cups is also referred to as the Lord of Loss in Pleasure, and is aligned with Mars in Scorpio. It represents disappointment in areas of the heart, longing and misunderstandings in relationships.

Mars is energy and willpower, and in Scorpio this is greatly amplified to the point of being obsessive. Where common opinion is to let go and take a breather, Mars and Scorpio both refuse to give up and so being unable to let things lie that perhaps haven't turned out so well, like a dog with a bone one is determined to worry and fret and knaw away at situations and relationships that are best left alone, at least for a while.

There is a loss of emotional equilibrium here, and what was once anticipated and eagerly sought has now lost some of it sparkle and shine. There is a realisation that what one has been looking towards and desiring is not all that it appears to be - all that glitters is not gold.

In love matters (to which the Cups so often refer) here are perhaps feelings of disappointment and betrayal, and this usually occurs because during the early stages of infatuation and attraction in relationships, we are often unwilling to see anything that doesn't fit our fantasy of a perfect love and happily ever after.

And yet it is by going through this stage in any relationship, where we wipe away the illusion from our eyes that is of our own creation (and is just a reflection of our Self) that we can learn and appreciate the gold in the other person, which is an appreciation of differences and represents learning something we did not have access to before. This is where the magic happens!

Often this card represents a temporary situation of loss, and a misunderstanding that in time will be resolved, with patience and care and maturity.